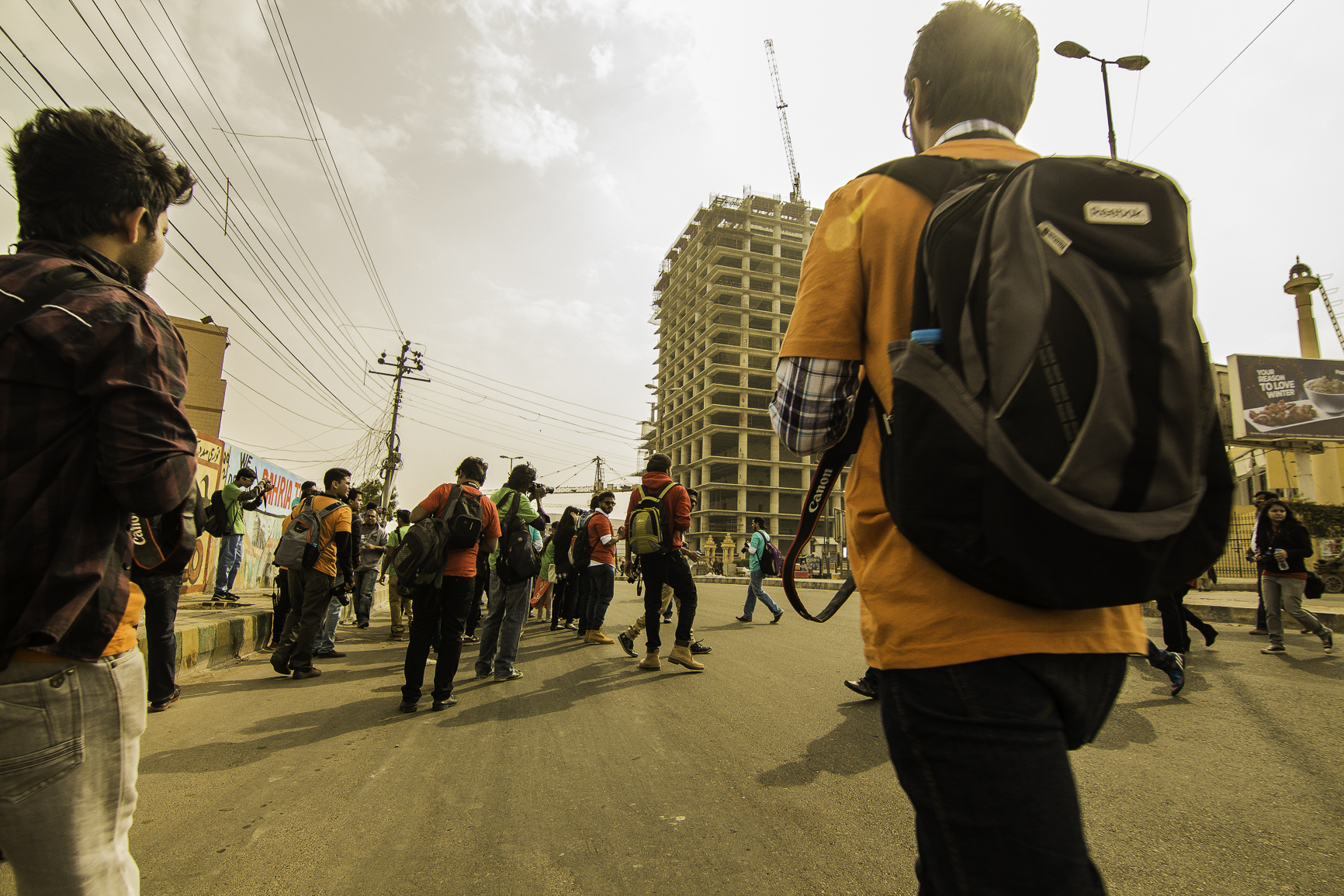 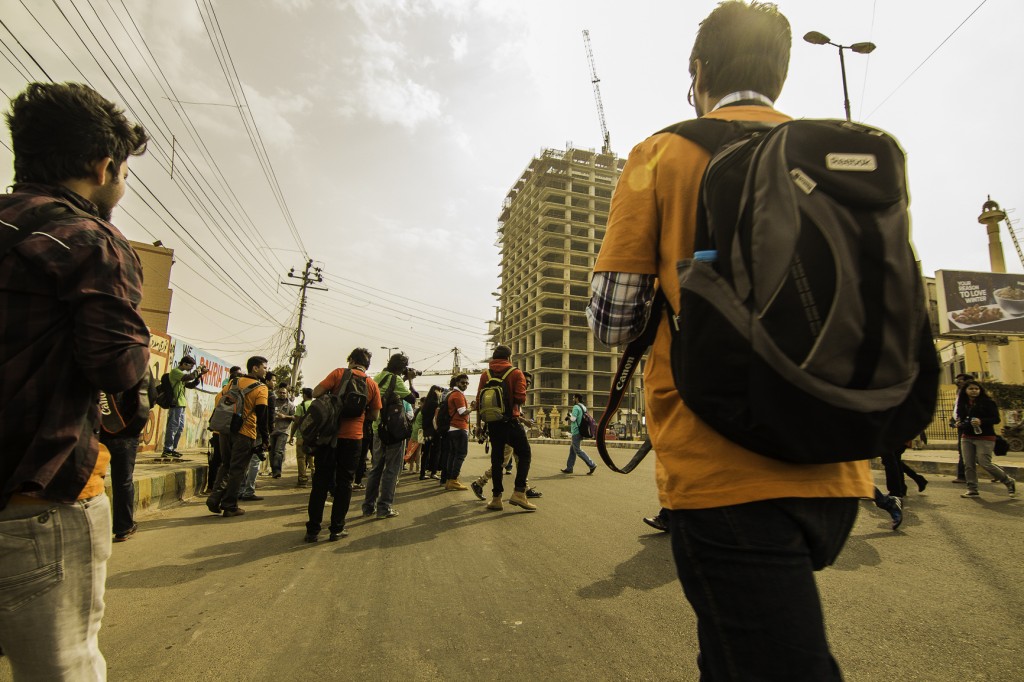 The 4th Karachi Photo Walk was held on 22nd December 2013, which started off from Jehangir Kothari Parade at Clifton, and ended there only. The walk was sponsored by Gloria Jeans Coffee and The Burger Factory both of whom were conspicuous by their absence.

In between there was an extremely brief walk to Abdullah Shah Ghazi Mazar with no one allowed to come even close to the place.

And what do we get? Take a wild guess. Biryani, you say? Even that would look like Mon Salwa compared to what we actually got. Dilpasand’s lunch box.  Only that it wasn’t a lunch box. Looked like one. But ‘khoda pahaar aur nikla chouha’.

There were two items within it: a chicken roll and a colorful circular disk from outer space which was filled with chicken and ‘saunf’- a cross between a pie and a ‘pan’. Yeah that’s how queer it was. I was half expecting to come across a ‘chaalia’ on one of the bites. 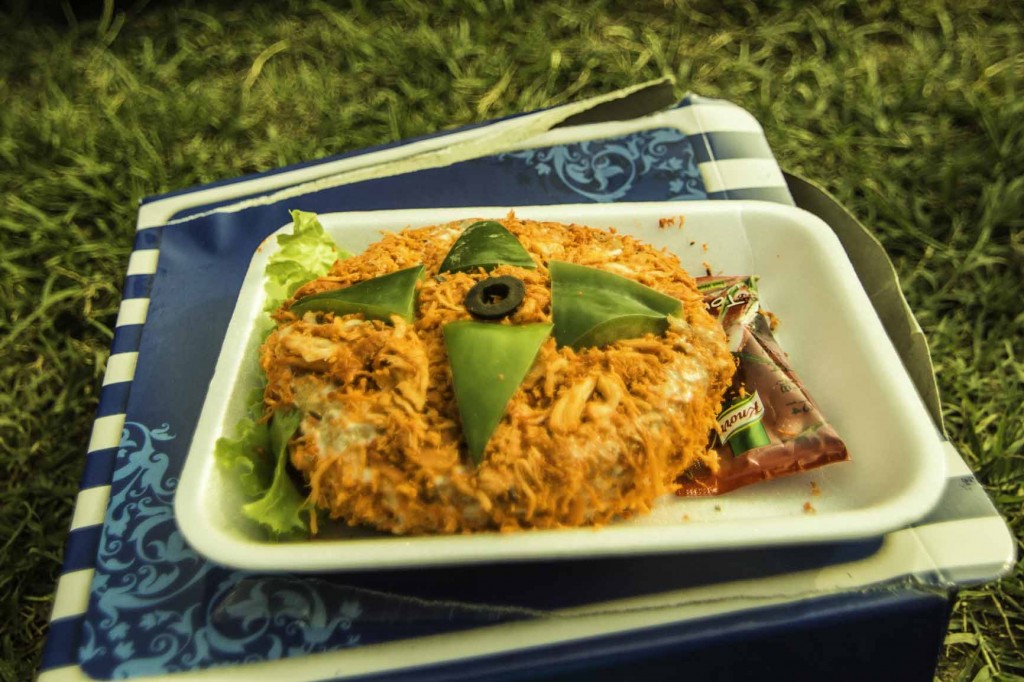 After wolfing it down, one of the trainers himself remarked that he was through with the appetizer, where was the main course?

I spoke to a couple of participants that were there in the previous editions of Karachi Photo Walk as well as to one of the trainers himself, and they unanimously judged it as the worst of the four.

But again the ‘worst’ is a relative term here. Those who were participating in a photo walk for the first time or those that had little or no idea of how to use a DSLR, it was a good experience for them because the trainers were no doubt really helpful. What’s more the Canon Gang members were also pitching in with their advice wherever possible.

However, for those that have a bit of an experience with DSLRs or have already participated in previous walks, for them it was a big disappointment.

That’s because this group joined the walk because they expected it to give them access to those areas of Karachi where they would never dream of capturing shots with their DSLR alone. Ok maybe they could, but it would be more of a nightmare where the DSLR vanishes into thin air as soon as it is taken out from its cocoon.

If you’re going to be taking them to places they have already captured and won’t tell them about the venues beforehand, surely they have a right to be pissed off.

Karachi is brimming with places of architectural significance. There’s Mohatta Palace, Empress Market, Tower, churches in Saddar, Radio Pakistan building, Kemaari, Manora – the list is endless.  There was a protest by MQM on that day near the Press Club, and that’s the justification given by the organizers for not being able to take the group to places of real value.

First of all, MQM has lost its ability to paralyze the city completely with a strike. Gone are those days. That means if one area is strike affected, there will always be places which aren’t. Secondly when you’re planning something of this nature in a volatile city like Karachi, you always contingency plans. Not just a B plan, but a C and D plan.

Finally, when you’re organizing an event for the fourth time, surely you would have learnt something from the past experiences and not repeating the same mistakes.

It doesn’t matter if the ticket is for Rs.700, Rs.1500 or even Rs.2000, all those that were participating could surely absorb the price hike. All they want is a proper management of the event.