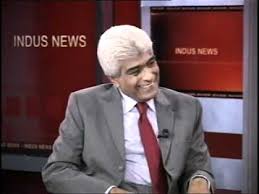 Mahmood Nanji is one of the marketing gurus of Pakistan’s branded world, having served at the forefront of many company’s marketing department, including the coveted position of CMO (Chief Marketing Officer) at Tapal.

He was the force behind the TVOne program Brand Power, a one-of-a-kind program on the Pakistani electronic medium. Although it generated a lot of interest, for some reason it was discontinued. He has now moved to Indus News and started a new program Story of Success.

of Success is not a groundbreaking idea like Brand Power. However, how it differs from other such interview programs is focus on only the success factor, how the interviewee got to where he is, what were the obstacles faced and how did he tackle them. So it’s not a generic interview where the celebrity reveals his likes and dislikes, hobbies and interests. The other differentiating factor is the type of people who are invited to bare their entrepreneurial soul on the program. Although there have been some high profile people like Nabeela who has been interviewed a gazillion times, most are people you haven’t heard about or seen in any interview, people like the owner of Student Biryani, Lal Qila and Arizona Grill. All of them were people who started from scratch and have reached the zenith of success and yet they remain shrouded in obscurity due to general apathy by the media towards successful entrepreneurs. So most of the people on the program are entrepreneurs with the rare exception like the CEO of Siemens, who belongs to the corporate world. His rise to the top is nothing short of spectacular. He joined Siemens as a management trainee in 1984 and said that within 10 years he would be the CEO. People just laughed at his ambitious drive and yet a decade down the line he had achieved his goal.

Tycoon on Express News is quite similar to Story of Success but the host doesn’t have the same aura as Mahmood Nanji to make an everlasting impact.

The lack of interest by the media in this breed of people is probably due to the fact that these people don’t have an onscreen persona which the local media rates as the wow factor in wooing the audience toward their channel. The quality of content especially the wisdom these people can communicate to the audience is not given preference by our local channels. In this sense, Indus News has done a tremendous job in breaking away from the status quo and trying something fresh.

So, going by the famous BCG matrix, will Story of Success go on to become a star or end up a dog?

For starters, Indus News itself is not the strongest of brand in the world of News Channel brands. Geo and Dawn News rule the roost while Aaj, Dunya, Express and Samaa follow close behind. In this cut-throat competition, Indus News has its work cut out. Amazingly, not a single channel from this lot is willing to differentiate itself in some way, not having the guts to break out from the brand clutter. Everyone wants to follow the same red ocean strategy which the market leader has set out and no one is venturing forward to come up with a blue ocean strategy.

Does that mean any program which is on a channel that is not popular itself is doomed for failure? Not necessarily. But it does help tremendously, especially if your media reach goes beyond just the electronic medium.

Take the market leaders. Any program they produce they promote aggressively not only on their own sub-brand channels, but also in their print publications. Geo for instance promotes a new program on all its sub-brand Geo Entertainment, News, Super and Aag, as well as Jang and The News newspaper. Think of the enormous reach of all these communication vehicles combined together and compare it to what Indus can do. If Indus is to use all these modes of communication, it would cost a fortune to it whereas on the other side Geo and even Dawn News can do it literally for free owing to belonging to powerful media conglomerate which is omnipresent in all modes of communication.

Indus News cannot compete with the likes of these giant brands. And any program aired on it faces the same dilemma. So what can ‘IN’ do about this?

For starters, it has to upload all the aired episodes on the internet, preferably Youtube. This was what was done with the program Brand Power whose episodes were uploaded on the website brandsynario.com. This is the most basic requirement in today’s age of media proliferation. With a plethora of channels to choose from, chances are your program is going to be missed by majority of the target market who may be viewing something else at the time the program is aired.

But would that be enough? No. At the very least the program needs to have a strong brand presence on the internet. Ideally it needs to be promoted 360º but since that’s going to cost a fortune, internet seems to be the most viable option.

On the internet, it needs to have a brand identity on Facebook, Twitter, Linkedin, Youtube and Slideshare. It can take a leaf out of Naveen Naqvi’s book who has done a tremendous job positioning her program on Dawn News on the internet. Then there’s Ayesha Alam and Faisal Qureshi both who have done a good job themselves promoting themselves and their talk shows online. They even maintain a blog, which wouldn’t be a bad idea for Mr. Nanji himself.

Although they have come up with the facebook profile, it needs to be constantly updated and spiced up with a few attractions as well. For instance you can offer prizes for winning a quiz which is based on the contents of a particular episode. This would certainly pique the interest of the audience.

There’s a small clip of one of the episodes with Citizen Foundaton’s creator Mushtaq Khapra’s but that’s uploaded by one of the viewers rather than a deliberate ploy by the producers or promoters of the program. Finally Mahmood Nanji’s personal account at Twitter has tried to promote the program but the program needs to have its very own Twitter profile.

That’s the promotion part. What about the program itself? Is it great? Or does it need to improve? Yes it does. While making it glamorous wouldn’t be a good idea, adding some other elements would definitely spruce up the proceedings. This could include pictures from the interviewee’s past highlighting his achievement. A brief look at the business in action during the course of the interview would add further depth to the program. Although this format was followed in the Liberty Books program, it isn’t made the standard format which is a pity.

Story of Success could go on to become a renowned program which inspires millions of people. All it needs is a few tweaks of the format coupled with a healthy dose of some shrewd marketing.