Have you tried Unilever’s new Anti-Dandruff Shampoo Clear? The brand has been out in the market accompanied by a full-fledged brand campaign for quite some time now, but I tried the Men’s version of Clear (for oily hair) only a few weeks ago.

Being in the branding business, I was most curious as to what enticed me to go for this brand. Was it Amina Haq or Atif Aslam (the celebrities endorsing it)? Or some other factor?

After racking my brain, I’ve identified the phrase in the new Clear TVC which states that men have more dandruff than women, and that Clear for Men has the formula to tackle that.

This was the single most important factor in my buying decision. So, was it that simple? That I wasn’t swayed by any of the glitter except a plain fact? Maybe it is. Or maybe the affinity for this brand was slowly building up in my subconscious mind by seeing the Clear TVC and all, and that hearing this fact was the final nail in the coffin. Who knows.

But why didn’t I go for Head n Shoulders endorsed by Shahid Afridi? Was it because the Clear TVC appealed to me more,  was more exposed to Clear’s communication tactics, or am I more tolerant of Atif Aslam than Afridi?

This just goes on to show that human decision-making is an extremely complex, irrational and non-linear process which cannot be predicted by any of the theories we religiously studied in our consumer behavior course. Which essentially means you’ll never know for sure beforehand that the brand strategy you’ve meticulously devised would work. It’s not an exact science by any stretch of the imagination. So you’ve to bundle the package with a lot of stuff, like Clear’s brand manager did by mixing glamour and facts all into one.

I definitely wasn’t bedazzled by the TVC, that’s for sure. I mean, if Atif Aslam chooses Clear ‘Men’, that’s his choice, but queer men just doesn’t do it for me. If this TVC was made in the West, Atif Aslam would have been the butt of jokes all around.

It’s in Pakistan where most of us didn’t realize Unilever’s ‘gay’ blunder, otherwise he would have been toast. A parody of this TVC, I would love to see. Maybe Azfar and Mani could do something about it.

So now that I’ve bought the brand, what next? Do I become loyal to it? Surprisingly, brand loyalty in most of the cases of FMCG brands depends upon the actual benefits and not the perceived ones. For instance, I was swayed by the branding of Bakeri by LU to have a go at it. However, I didn’t like the taste (which was a bad variant of Sooper) and there was no benefit, real or perceived, communicated by the brand strategy, so I haven’t touched it again.

And therein lies the conundrum of FMCG branding. It is extremely difficult to elicit a brand loyalty that is ever-lasting. Evoking a trial sales or even a repeat purchase is no big deal. Only last night, a friend of mine had the urge to eat ice cream. We went to his ‘Mohalla’ store where he was rummaging through the Wall’s freezer (which by the way carried ‘other’ brands as well) when he saw a ‘Win an ipod’ caption on a Cornetto. Without thinking twice about it, he just bought it and then gleefully opened it in the hope that this would be his lucky night. It wasn’t.

I wonder whether he would have become a Cornetto Evangelist had he won the Ipod.  I also wonder what would be the effect of a deliberate effort by Unilever to influence the results. To be specific, what if Unilever ensured that each and every Mohalla store in each locality of each city carried at least one major prize, and the moment a prize was won, Unilever would create a hoopla in that neighborhood sensationalizing the win and putting the winner’s photo along with the prize in all the stores of that Mohalla. How’s that for a sales promotion? Very expensive indeed, and difficult as well, especially the part where you’ve to ensure that the cold chain carries a major prize to each neighborhood.

Coming back to the brand loyalty, it’s not impossible mind you; you’ve colossal brands like Pepsi and Coke and Pampers and Ariel and Kit Kat and what not to prove that.

Coming back to myself as the consumer, will I get hooked to Clear for Men? Let’s see. The packaging is good enough – it appeals to me. Now only if Unilever had done their home work and not shaped a men’s shampoo bottle like a woman’s silhouette like they’ve done with the female version, it would have been great.  . Unless there’s an authentic research which proves that men like to hold objects shaped like the body of a woman, I would change the shape immediately to more masculine, something like broad on the top and thin on the bottom, a V-shape like the perfect masculine body.

Coming to the text on the front: 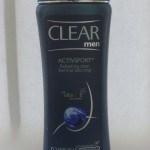 –ActivSport ™ (there’s no explanation anywhere why ActivSport is ‘TM’ed, unless the Unilever want to give the illusion that it’s something sophisticated while in reality it may just be that, a word), 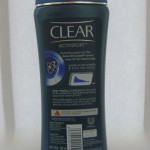 ·        Attention: Dandruff-free confidence attracts more women. Be prepared. (This maybe outrageously untrue but coupled with a warning sign it stands apart, and that to me is a brilliant move.)

·        (A pictorial representation of how you get rid of dandruff in four weeks. Again a good move)

·        Raabta – Questions or Comments? Call free 0800-13000 Write P.O Box 15522 Karachi  ( Raabta? It sounds like the hotline for the population control department of the government rather than the hotline of an MNC marketing an upscale branded shampoo. And then who on earth would write to them via the snail mail? And how many would call?  That’s way too 20th centuryish. A better option would have been to include an email address, a Facebook link, and even a twitter link. )

·        (The rest of the back is covered with explanation about the usual directions, ingredients and the advantage of using Vita-ACE mentioned on the front.)

Then we have the color of the shampoo – a sky-blue. Again good.  The fragrance to me is the forte of the brand. I love the aroma which lingers on for a couple of hours after you’ve washed your hair. I just pray that this scent does not go on to wreak havoc on my hair follicles.

But wait a minute. If the smell is the forte of the brand, what about its supposed-to-be brand essence – anti-dandruff shampoo? If the crux of the brand isn’t its high point, how on earth is the brand going to grow? Yeah, that’s a big problem alright.

But the thing is, what’s wrong for me maybe right for someone else. For how many consumers its right, that’s the million dollar question. For me, the brand promise does not live up to the hype because, to put it simply, it’s not any better an anti-dandruff shampoo than the others in the market. I switched from Selsun Blue, which I had been using for ages, to Clear about a month ago, and so far the results have been nothing to write home about. Maybe it would fare better after I’ve used it for a couple of months, but I’m not sure if I’ll get that far. I may be tempted to use it for that long solely by its great fragrance, or I may not.

At this point in time, my experience tells me that the brand is superior to the actual product it is representing, for I’ve experienced no results better than the other anti-dandruff shampoos. My line of thinking is that it’s just another anti-dandruff shampoo with no real POD (point of differentiation) or USP (Unique Selling Proposition). Maybe I’m wrong. What do you think? Have you’ve had better experience with this brand?

But if I’m right, than that makes the branding all the more successful, having exalted an ordinary product to the brand pinnacle! This is what branding is all about.

One of the things the brand manager of Clear could do is launch a hair clinic where consumers like me who have used the brand but not completely satisfied with it can come and share their experience, and a hair specialist (probably a dermatologist who can vouch for Clear being a ‘technically sound’ shampoo) can answer the queries and offer tips and suggestion to augment the usage of Clear.  Then of course, Unilever can make the whole occasion fantastic by offering goodies like sachets of its own products and some sumptuous refreshments, something which it used to tremendous effect at its Youday series.

Another branding campaign on the heels of this one, but entirely different from it may do the trick. If it does manage to persuade me, it would pay rich dividends to Unilever for I’m a long term user who doesn’t like to switch shampoo brands i.e. I’m a user with a high CLV (Customer Lifetime Value).

And that ought to be the objective of any second brand campaign after the brand launch, to lock in customers with high CLV. Clear has a great chance to make that happen now.