The fact it’s a strong brand can be proven in many ways. For starters, it follows the laws of branding more than any other FM channel. Most of them strive to be everything to everyone, one of the most common fallacies committed by any brand in any industry, whereas CityFM89 strictly adheres to the law of focus whereby it tries to cater to a  specific niche.

The second reason it can be deemed a full-fledged branded radio channel is its shrewd marketing strategies which woo the top brands to it in spite of the fact that it’s target base is nothing compared to channels like FM103 and FM100. 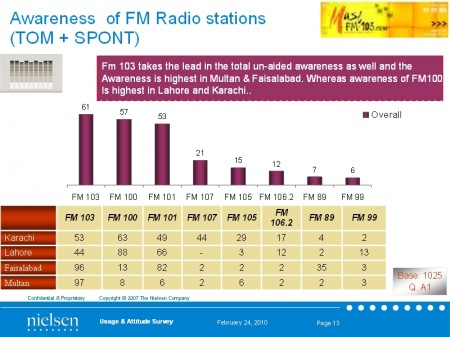 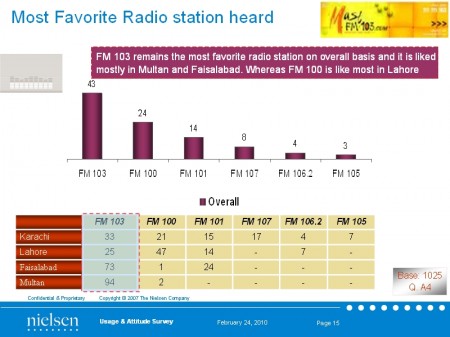 Not the most popular channel, huh? And yet it has been able to make brands want a piece of it. That’s the ultimate aim of any branding endeavor – to make your consumer crave for your brand. Whether the underlying reason for this change of fortune is its marketing manager Munizeh Sanai or someone else is not known.

But exactly how they are making it happen? By coming up with branding ventures that are cost-effective and yet appealing enough for the target market. For instance there was the ColdPlay Concert Tickets contest sponsored by the new Toyota Corolla, then there was the Valentine’s brand campaign ‘Have love, Will travel’.

The latest to hit the market is the ‘Spotlight’ : The Chance to become Pakistan’s next singing sensation sponsored by Nokia’s 5230.

But the event under scrutiny in this article is the ‘Win a Macbook’ Contest, the prize for which is a MacBook. Now they haven’t mentioned which one of Apple’s laptop they are referring to, whether it’s a high end product or just a low end one, but then a MacBook is a MacBook and of all the prizes offered by CityFM89 till now, this one looks to be the most lucrative of all. 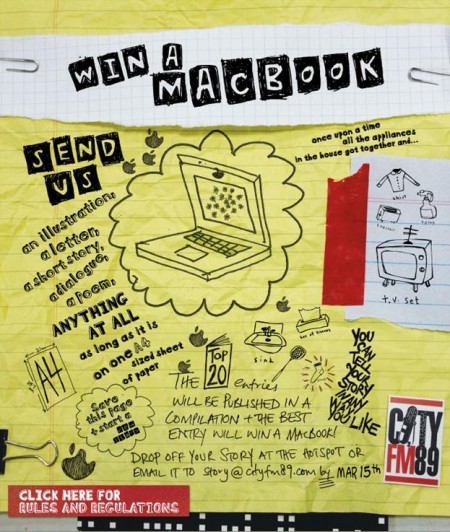 Win a Macbook on CityFM89

Normally CityFM89 doesn’t advertise their contests much over the boob-tube or even the print media, confining themselves to just the radio medium and the website. This time however, they went one step ahead and made a small TVC which they placed on, guess where, Dawn News channel, their sister concern. It makes perfect sense, considering they probably didn’t have pay a single penny for this endeavor. The only problem is, there is a disparity between where the target market is likely to be found and the placement of the ad. The target market is primarily the teenagers and at most 20something. Now these segments are unlikely to be watching Dawn News. Even if they do, they do it for very brief interval of time, and considering the frequency of the Macbook ad, chances are they are going to miss it altogether. A far better option would have been to target channels like Aag, Play TV, Oye TV, The Musik and the likes. That would have cost money, but then there’s a cost for everything.

The reason we are emphasizing so much on the penetration of the ad is that the contest hasn’t caught on in spite of the allure of the Macbook. The biggest indicator of this lack of response is the fact that the management of CityFm89 has extended the deadline for the submission of entries to more than 1 month, from 5th February to 15th March. Now that is something very strange. Even stranger is the fact that even now CityFm89 hasn’t increased the frequency of the TVC on Dawn News.

The reason CityFm89 didn’t really pour money into the contest popularity was the fact that they were banking on word of mouth online to spread the news around. And they pretty much covered most bases online to make it happen. Just Google the phrase and you’ll get an idea of how much interest the contest has generated in cyberspace. The epicenter of this interest online is Facebook.

And yet, something has not gone right. Either that or  CityFm89 was expecting an overwhelming response to this campaign and the result, although good enough, is not enough for the management of CityFm89. After all, they are dishing out a MacBook as a prize. They probably want more bang for their buck.

It could be, the response hasn’t been dazzling not because the marketing strategy was flawed but because the contest itself hasn’t tickled the fancy of the target market. So what exactly is the contest?

Basically, the participant has to unleash his creativity and submit a unique story that could fit into one A4 size paper. It could be anything – story, article, poetry, illustration – anything at all, provided it is not plagiarized. 20 top entries will be included in a publication while the winner amongst this lot would get the Macbook. This contest was to coincide with the International Storytelling Week starting from 26th January.

On the face of it, it does appear attractive enough, but maybe the consumers who are being targeted are too lethargic to probe their brain for even a single page of creative expression. Or maybe people have responded alright, it’s just the responses have been either below par, crude or plain obscene  to be published. There could be a myriad reasons why the CityFm89 people had to go to the extreme of extending the deadline by more than a month.

Yes, the marketing strategy is good but it’s not great. If you take just the online tactics, CityFm89 could have done a whole lot more. With most of the social media tools virtually free, they should have created accounts specifically geared for this branded contest on most of them instead of just confining themselves to Facebook. Even on Facebook there was no dedicated page for it.

A Twitter presence is a must these days. Then there’s the now old-fashioned but still popular blogging platform. Ideally, the management of CityFm89 should get hold of a popular blogger to carry this out so that he reaches the maximum possible number of people in the blogosphere.

But what would be posted on this blog. How about the entries itself? Make it interactive. Get people to vote for the entries and pass judgment on them. Right now the participants have no way of knowing what their competition is like. By looking at what other people are contributing will not only help them get an idea of where do they stand, but also galvanize them into action.

Then all those bookmarking services Stumbleupon and Digg and what not will also come into play big time. There have been a little bit coverage in the blogosphere but the top bloggers have chosen to either ignore it or they don’t even know about it.

One more thing the CityFm89 people could have done was offer some sort of consolation prizes for the top 20 contributors instead of just confining the prize for the number 1 spot. They could still do it. Just approach a couple of brands to sponsor these prizes and the contest’s attractiveness will increase exponentially. Nothing big or expensive.

And a youtube presence of the TVC is a must.

All in all, the concept is a novel one and Pakistanis need these sort of platforms for their creative outlet. What’s amazing is that no major brand has come forward to sponsor and promote this contest.