I walked through the entrance gates and instantly knew something was wrong. And the first thought that came to me was it was me who was in the wrong. Won’t be the first time. I’ve had landed at the wrong hotel for a conference before too.

I decided to check the ballroom just to make sure. The venue was correct alright. Only the set-up was still in progress at the time of the start of the event. Suddenly the thought that crossed my mind was maybe it was my own BTL agency managing this event, which has a penchant for last-minute dramatics.

But that wasn’t true either.

And where the hell was everybody? There was an eerie silence, more pervasive than the one at Chowkandi Tombs. No chalk that out. Even there the guard screams like a lunatic asking you to stop taking photos. Here they didn’t have any lunatic guard either.

In any case the place should have been crawling with policemen and agency people. After all this conference was supposed to have the Chief Minister Murad Ali Shah and US Consul General Brian Heath grace the occasion with his presence. Right?

It was 9am already, it didn’t look even a janitor from the US Consulate was going to be coming here. 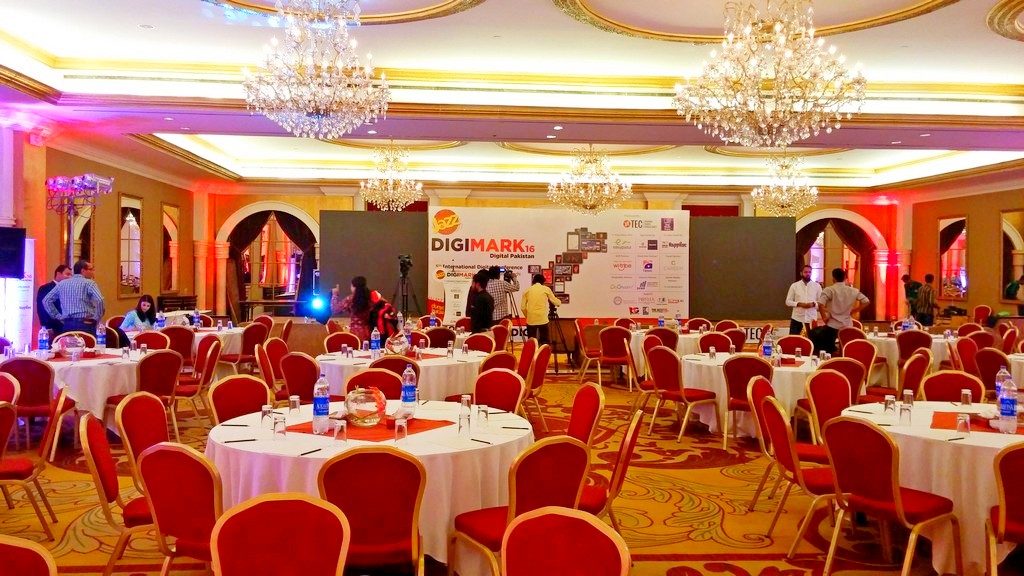 But that wasn’t all.

Something else was bugging me. Hmmm…. Ah yes! I had breezed into the hall and sat at one of the tables just like that. No one had asked me, who the hell I was? What was I doing there?

That’s because there was no one to ask that question. There was no registration booth. No check-up at the entrance. No nothing. You could walk in and attend the conference just like that.

I felt like a fool. And a bigger fool when lunch started. If there were 50 in the hall in the pre-lunch session. There were 500 at lunch. My guess is participants’ friends, mamas and maamees, khalas and khaloos, guests staying at MovenPick, guests staying at PC across the road,  bell boys, janitors, pretty much anyone you could think of was having what I could safely assume a literally free lunch. I think I saw a couple of dogs and asses as well amongst the free-riders.

I was tempted to invite my friends over too, had it not been for the food itself. Let’s just say I’ve had better stuff to stuff my stomach with at funerals and Soyems. Nope. Not exaggerating.

Finally the conference started by a meek looking hostess with equally meek remarks that the conference had to start late because of unavoidable circumstances. 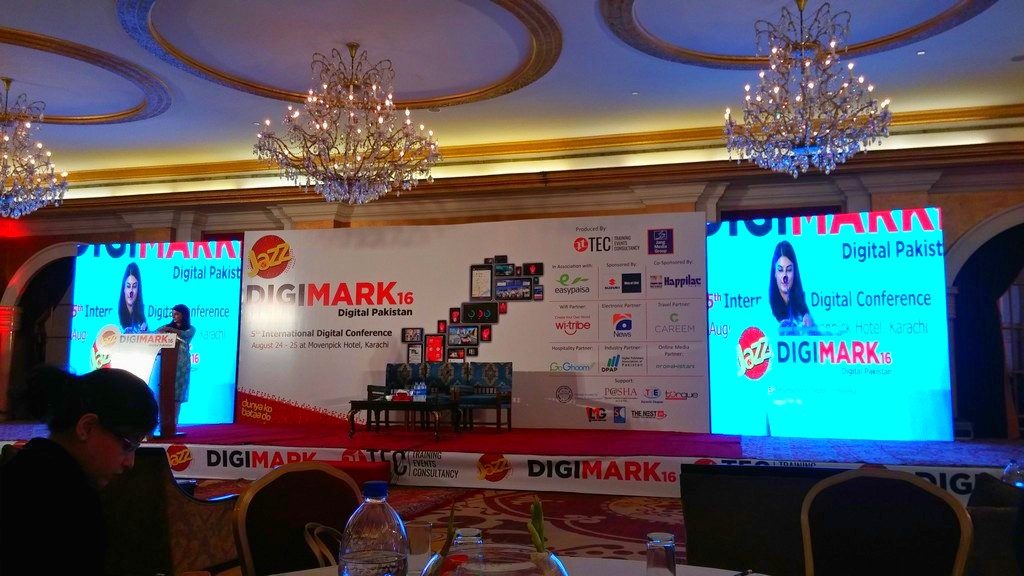 The opening remarks were given by a guy who couldn’t even seem to read properly from his own notes.  The keynote address was conspicuous by its absence.

I think there must have been a No-Show Contest going on there, because as many as four speakers didn’t show up. In addition to the afore-mentioned two superstars, Sarmad Ali, MD Marketing Jang and Aamir Ibrahim, CEO of Mobilink itself, the main sponsor of the event.

Perhaps all four of them got up on the wrong side of the bed and decided not to tempt the Fate Goddess by venturing to this seemingly unsinkable Titanic.

Boy, were they four lucky. If only I had known of this No-Contest myself, I would have saved myself a lot of misery.

And the conference starts. To be fair, most of the speakers were good. But overall DigiMark just pales in comparison to the recently held Dig-It and Marcon 2016 conferences.

Khurram Jamali, Country Head Google got things off to a good start with his artificial intelligence presentation. 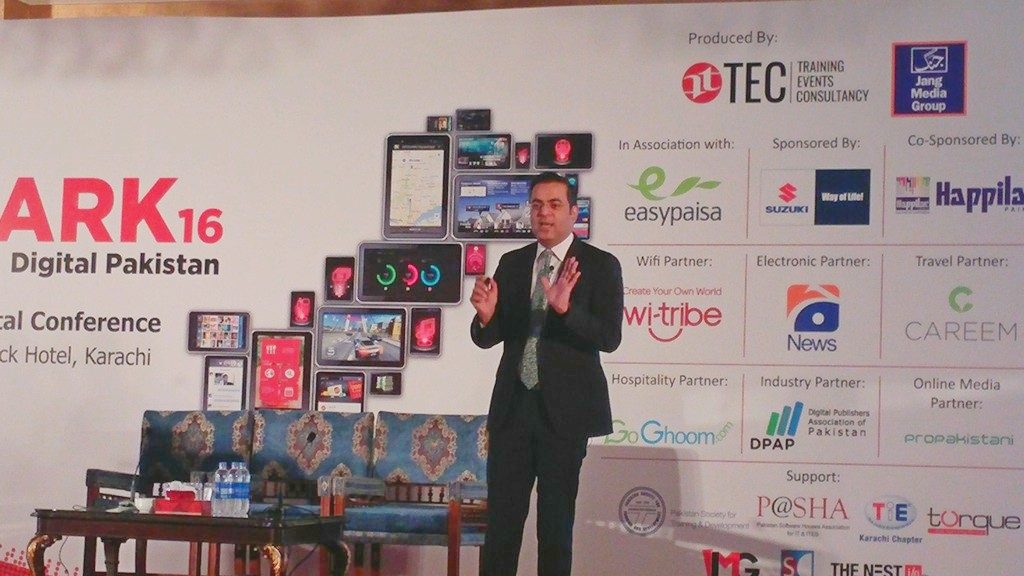 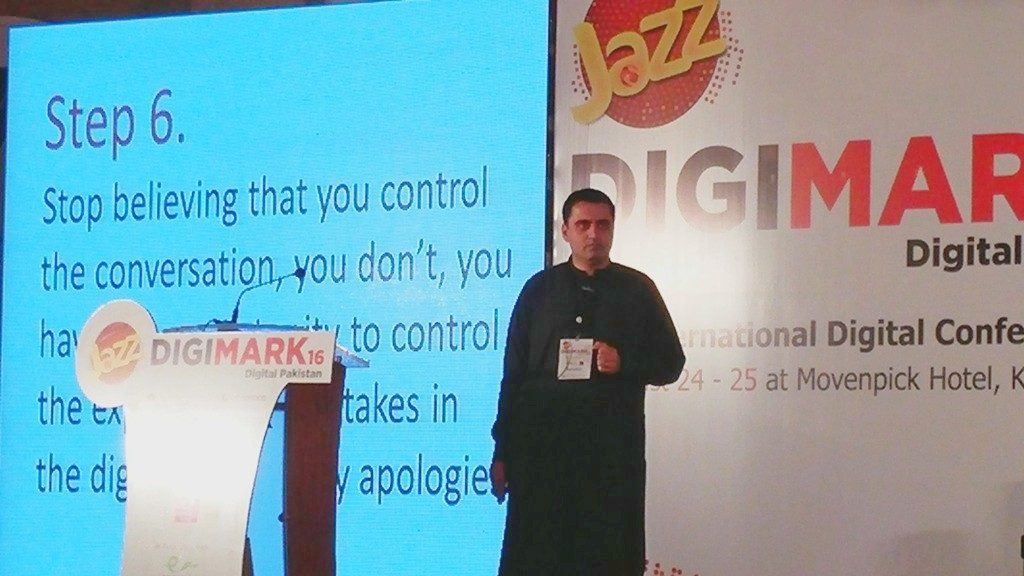 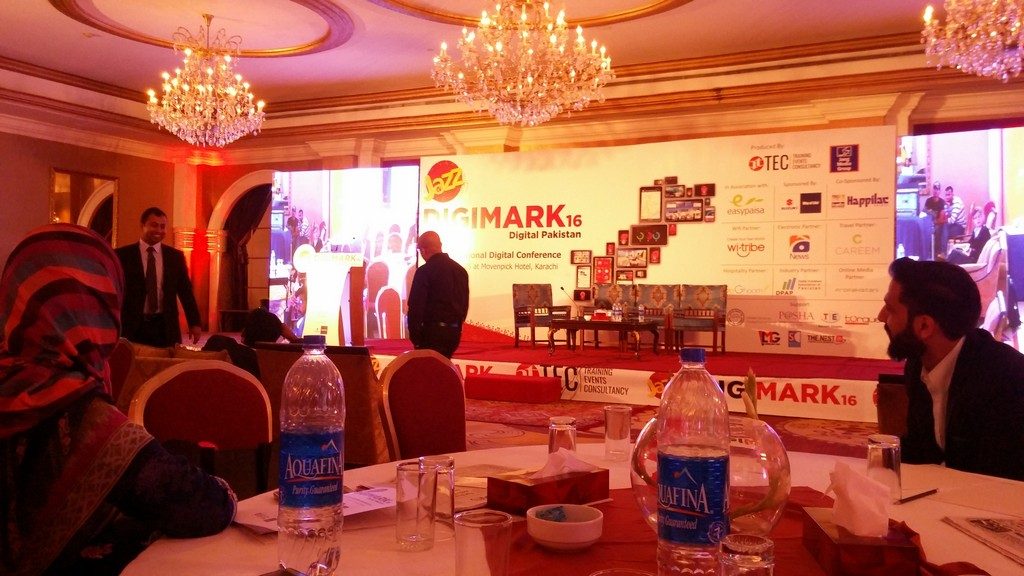 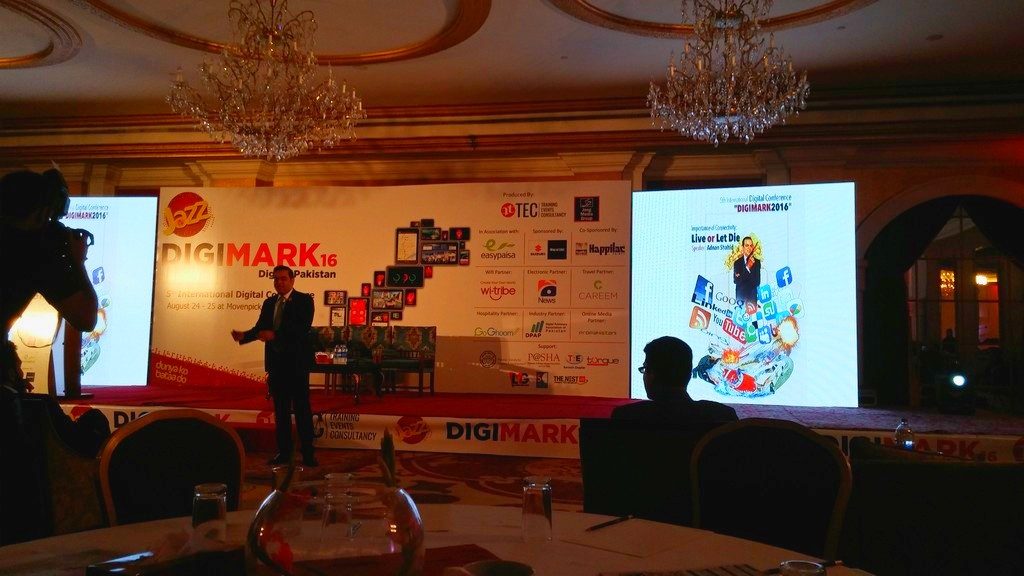 But the man of the hour came in next. Loved Adnan Shahid’s presentation. The CCO of PTCL was the only presenter who seemed to have put some work into making his presentation likable by his audience. But that wasn’t all. He was part of multiple panel discussions including the very last one, and continued to churn out pearls of wisdom till the very end, including fielding some hostile questions from the audience. That guy sure has some stamina.

There were no other presentations that stood out. Sohail Zindani’s speech just after lunch was quite hilarious but it wasn’t a presentation per say.

And that’s because there weren’t many to begin with. It is the first conference I’ve attended that is chock-full of panel discussions.

There’s nothing wrong with having panel discussions. They invariably add to the knowledge of the audience. But you just can’t have panel discussions after the other especially post lunch. That’s criminal. Whoever created the schedule of this event didn’t know jack about what works and doesn’t in an event. He should be hanged. Okay maybe not till death. Or waterboarding seems to be a very fine alternative.

No tea in the evening? Of all the conferences/seminars/workshops I’ve attended over my 10-year corporate life, even the ones where I took sweet little power naps; or the ones that cost a mere Rs.5,000, this is the first that didn’t offer tea the second time around. And it cost a staggering Rs.18,000. If it was getting out of budget to offer a second hi-tea, they should have done away with the snacks but at least given the solitary tea.

50 lashes please for the organizer.

Someone at Mobilink must be pulling his hair out this night. If they have any to begin with. It must be one hell of an event management company to dupe Mobilink to such an extent. Aamir Ibrahim, the CEO of Mobilink must be thanking his stars he couldn’t make it to Karachi to watch this debacle in action.

If this was the West, Mobilink would be suing their ass off.

If this was the Wild West, Mobilink would be shooting their ass off. Or maybe we would have a duel.

Or maybe I’m being too tough on the poor guys. Maybe this is the standard of events held in Islamabad, because this is supposed to be the fifth edition of Digimark, all of them having taking place there. This is the first time they’re holding it in Karachi. Maybe they just don’t know the caliber of events in Karachi.

So that was that. But wait. I haven’t revealed the icing on the cake. Nope. The poor organizer didn’t have anything to do with that. It was the hotel management this time around.

The valet guy brings me my car after making me wait for ages with the right side of the front bumper scratched with an ugly black mark. Talk about the perfect ending.

And the driver just hadn’t got the bumper scratched, he had been tampering with my deck as well. How do I know? I listen to podcasts in the car stored in a flash drive attached to the deck. When I tried to play that….I knew it had been tampered with.

And this is why I hate MovenPick hotel as the venue for any event. They just don’t have any proper parking space, and whatever little they do, they make you use the valet service.

This time around, they may have to rue that strategy. Because while I’ll get my bumper repaired under insurance, this act of theirs would get talked about on all social media platforms courtesy my profile following there, and even on this blog it would remain till perpetuity. Talk about bad press.

Kahani abhi khatam nahi hui hai doston. We still have the second day to go for the mesmerizing Jazz DigiMark Conference. Who knows what industry lows would be achieved in tomorrow’s momentous day.

Someone please get the Guinness Guys ready.