the below mail, some one indicated that the matter is related to Lays

Masala as per original mail. I followed up and tried to track this. I

found that this Lays Masala indicates the prohibited E631 on it. I wrote

a letter to GE Pepsi Cola International, manufacturer of this Lays

product. Attached is the copy of my letter but he never replied.

replied to me on this issue. In this context I am now sure that Lays

includes prohibited versions of ingredients and I request that it must

Let’s boycott LAYS and distribute this information to all others.

> has proved that many products of multinational firms including, but

> have PIG FATS in them as ingredients.

> products. So we must try to avoid items with the following E Codes:

> E631 printed in the ingredients of LAYS POTATO CHIPS as flavour

> enhancers. Pig is HARAAM for Muslims. SO we MUST avoid eating it.

> our voices against this crime. 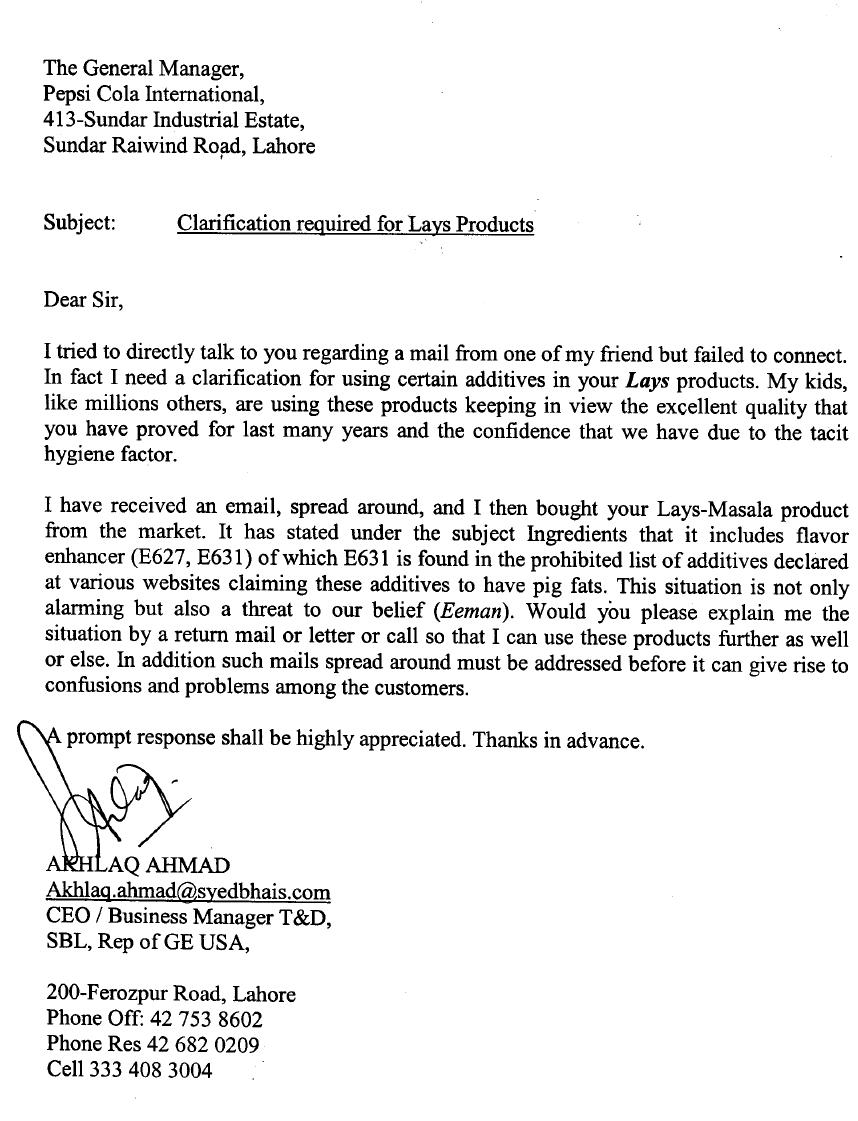 Now, there are some people in the Muslim world that are not bothered with the contents of what they eat. They are the least bit concerned about what whether something is halal or haram. But the majority of them are not, unfortunately for the management of Lays. Even many of those that are least bothered about the ingredients suddenly jump on the bandwagon of activists just for the heck of mowing down a big corporation. It’s another matter whether that corporation is good or bad. To them all big corporations are evil. Period.

Now I may not know shit about food chemicals and whether an ‘E’ does mean that animal, especialy pig extract is used, but as a ‘Faithful’ like hundreds of others who received this email, I’ve performed my duty of forwarding this email to everyone in my contacts list, which is quite extensive to put it mildly. And they in turn would do the same without first checking out whether it really is a genuine case or not. And within no time, half the Muslim world would be ‘enlightened’ about how the unbelievers are corrupting the believers.

We all relish conspiracy theories and this is as good as it gets, particularly the part about the CEO not responding to this query and keeping mum about it.

I googled the subject of the email and found that the news has already spread like wildfire all over the cyberspace. The blogosphere especially is flooded with opinions about this controversy.

In any case, Lays need to act fast upon it before their brand goes up in smoke, at least in this part of the world. If they have been doing what the letter says they’ve been doing, they need to say it out in the open, apologize profusely, and do something extraordinarily good for the Muslim world. Maybe donate generously to the Palestinians, because that is the most sensitivie touchpoint for the entire Muslim world. Anyone found siding with the Palestinians suddenly becomes the saint even if he actually is corrupt to the core. That’s how Muslim sentiment works.

And if the letter is a hoax, then they should go about educating the masses about the ‘E’ specifically means and how it couldn’t be Haram. They need to create a short film about how Lays are created right from the origin of the ingredients and distribute the movie throughout, especially upload on YouTube.

If the Pepsi and Lays management just sit on this issue, soon they won’t have a brand to worry about.