A new breed of events has been evolving in the  Pakistani diaspora for the last decade or so. However, its only they are being put under the limelight courtesy the proliferation of TV channels which need content, any content at all, just to survive.

And so car rallies, which were just an obscure sporting event in this part of the world are now becoming the ‘in’ thing to do. 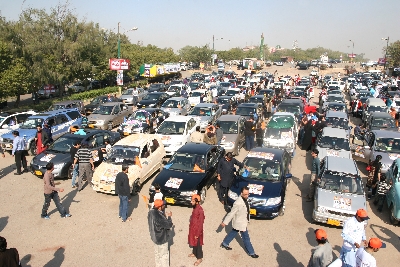 Car rally events have been taking place in Pakistan for ages, but they were mostly held outside the cities and only the die-hard fans participated in them with spectators only a pipedream. Then came Fast & the Furious at the start of the millennium and 10-second races gained popularity in the cities with people tweaking their cars and stuff. The fan following grew as well but even then it was a low-key event shunned by the mainstream media.

But now with all these channels struggling to come up with original content, these car related events have become a lucrative possibility. Their popularity has been further spurred by the sponsoring of major brands that are ever so eager to participate in a BTL activity. The result – while in the past hardly a single car related event occurred in a year, 3-4 events are now held every year.

Dreamworld Car Rally is one of those rare events that are being held every year for the last ten years. Although geared primarily towards the members of the Dreamworld Resort, the event is open to non-members as well albeit at a higher cost. In the last couple of years, the marketing department of Dreamworld is increasingly making efforts to make the event a prominent feature of the city, by not only purchasing air time on TV channels, but also approaching companies for a sponsorship opportunity.

Although the event hasn’t attained the pinnacle of success in terms of fame and popularity, it is an ideal branding opportunity. How?

If you go by the acceptable local standards of what makes a branded event successful, then Dreamworld Car Rally can be deemed a partial failure. The local standard entails that the event ought to be covered by one of the giants of the electronic medium, GEO, Dawn News etc. Then it needs to have a prominent personality as host, and then it ought to be sponsored by a plethora of giant brands like Unilever, P&G and Reckitt Benckiser. Anything short of this and the event is rated below par. And now, you need to invite bloggers as well to adjudge the event and buzz about it in the social media.

So what makes an event ideal for branding endeavor? First and foremost, the event should be a memorably pleasant experience for all the participants. This is the single most important factor for any branded event. You take this out of the picture, and nothing, no matter how big, could make either the event or the brands associated with it favorably placed in the consumer’s mind.

Secondly, it ought to be sponsored by major brands, but not so many as to induce brand clutter, something which is witnessed with regularity at Dawn’s Lifestyle Exhibition. Dawn’s Lifestyle Exhibition is a classic example of frills without the thrills. There are so many brands participating in the event that unless you have the capacity to dish out a couple of million rupees to highlight your brand at the event, it’s better to stay away from it. So many brands make the mistake of jumping on the Lifestyle bandwagon as if there’s a gold rush, and end up just throwing their money away with negligible enhancement to their brand equity.

They do have a plausible reason for participation. There’s this principle of consumer behavior that if you place your brand in the presence of popular brands, some of their popularity will rub off on your brand. And it does work. But not when you have a gazillion brands good and bad vying for the same thing.

The second major reason the Dawn Lifestyle exhibition has ceased to be a great branding opportunity is the sheer size of the traffic it generates.  With such a huge crowd cramming the once spacious halls, it becomes a struggle even to breathe properly let alone walk or shop around. Most of the time you spend getting nudged from all directions which may be a memorable experience alright, but for all the wrong reasons, especially the female visitors. In fact this time around the rush spilled onto the main road as well just outside the entrance to the site. The entire flyover over Hasan Square got choked because of the cars trying to enter or leave the premises, so much so that there was an accident as well between a car exiting and one going straight on the main road. What can be more unpleasant than that?

Coming back to the Dreamworld Car Rally, it is as near to a perfect branding opportunity as you can get in this part of the world. The biggest reason for that is the format of the event. It is designed in such a way that every member of the family participating has a rollicking time throughout the day filled with adventure, excitement and of course food and drinks for a very reasonable amount.

The format is that each participating family is given an initial set of clues at the starting point which they have to make sense of to discover the next check point where they receive the next set of clues and so on until the end. While the head of the family drives, the rest of the family solves the clues so that everyone stays riveted to the game. The checkpoints are distributed throughout the city while the finishing line is at Dreamworld Resort.

In that sense it is not a car rally per se since the emphasis is not on speed but brainpower.

This alone is reason enough for any brand to sponsor this event. But it is not the only reason. PSO, Pepsi, Dominos, Nelson, AGS, Red Bull, TV One, City FM89 and Shezan. Sound like big brands? Sure does.

Therefore it has got the big brand factor covered perfectly to the hilt because although big brands are sponsoring, but there aren’t that many as to cause brand clutter.

PSO, it has to be mentioned, has been the main sponsor of this event for the last seven or eight years. They must be attaining some substantial ROBI (Return on Brand Investment) so as to be sponsoring this event every year.

All this raving review of Dreamworld’s Car Rally doesn’t mean it was a picture perfect event. It had its share of follies, but these were more to do with the coverage of the event rather than the event itself. For instance, the event was to receive substantial coverage in the social media via Facebook as well as traditional media via billboards and mobile vans. In fact these tactics were to be applied prior to the event to create some hype. Dreamworld didn’t implement this strategy properly. Secondly, although the coverage of the event was comprehensive enough, something went terribly wrong in the editing room so that the final production was below par. For starters, the entire two episodes aired on the tv channels had majority of the focus on just three families selected before the event on God knows what criteria. 90% of the air time was allotted to the treasure hunt foibles and antics of these three families, 8% of the time was given to the starting point activities and a measly 2% was given to the closing and prize distribution ceremony.

Even if  Dreamworld wanted to give as much coverage to these families as it did, it should have at least ensured that they had some on-screen presence. The families were not comfortable before the camera, having no idea how to behave, whether to act naturally or dramatically. If Dreamworld had planned to bank so much on these families for the success of the program, they should at least have picked those who could carry themselves gracefully in front of the camera.

The bottom-line is that the brands that not only spent big money on the sponsorship but invested considerably in the activities on ground as well (like Shezan and Red Bull provided the participants with Red Bull, Atlas Battery’s AGS conducted free battery check-up) should have been given sufficient time on air as opposed to less than 30 seconds they received. Was giving a minute or two to these brands such a hard task? And the incredible thing was, the main sponsor PSO didn’t even get a single second!

If Dreamworld is to popularize this concept with the brands so that they invest more for it, they need to provide better coverage for them. No doubt Dreamworld has come up with a unique event unparalleled in this part of the world, and if they can just rectify the fallacies of this year’s event, it has the potential to become a mega event of the country.